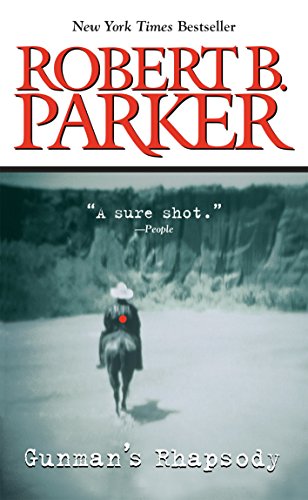 The gunman is Wyatt Earp. The rhapsody plays out in a rare Parker stand-alone novel, his best yet and his first western. Told in prose as cool and spare as Parker has ever laid down, the book details the time Wyatt and his brothers spend in Tombstone, culminating in the shootout at the O.K. Corral. Parker's Wyatt won't surprise those familiar with the author's Boston PI, Spenser, and with Spenser's sidekick, Hawk. This Wyatt Earp carries traits of both—Spenser's adherence to code, his word, himself, and Hawk's indifference to violence and death. But Wyatt is even more of a distillation than either Spenser or Hawk. He's the essence of the self-contained gunman; as he walks to the O.K., "he could feel the steady rhythm of his pulse, the easy flow of his blood." Events span years, but move quickly. Conflict arises when Wyatt falls hard for beautiful showgirl Josie Marcus and she for him, for she's the lover of local politico Johnny Behan. Johnny's jealousy leads to conspiracy, acts of cowardice and finally to the shoot-out. All the western legends associated with Wyatt play their parts—the other Earp brothers, Doc Holliday, Bat Masterson, Clay Allison, John Ringo—and Parker etches each in granite. "Are you ready to die today?" Doc asks a man who's insulted him. Occasionally, Parker intersperses the drama with reports (letters, news bulletins, notices) that add historical context though not much more; their inclusion is questionable. What's not is how, as events move toward their necessary conclusion, the narrative takes on the inexorability of classic tragedy. This is a remarkably artful western, as tough and as true as the slap of gunmetal against leather.