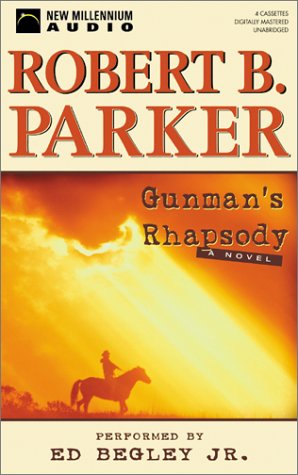 This retelling of the famous rivalry between Wyatt Earp and the cowboys is a minimalist's dream, but it doesn't offer much in the way of innovation. Begley has the kind of folksy, but literate, head-scratching charm—the farm boy who turns out to be smarter than he looks—that would seem to make him a natural choice to read Parker's shot at adding something new to the OK Corral legend. And Begley does a valiant job of bringing Parker's deliberately spare prose and discreet dialogue to life. But other actors' visions of Earp are more convincing (such as Henry Fonda in and Kevin Costner and Kurt Russell in and ). It's not that this production is particularly flawed, but too many actors have played Earp in myriad versions of the same story for there to be much that's original—or even interestingly retro—in the Begley variation. On the other hand, if there are any fans of Parker's most famous creation (Boston PI Spenser) who don't know about the Earps, this audiobook could open their eyes.