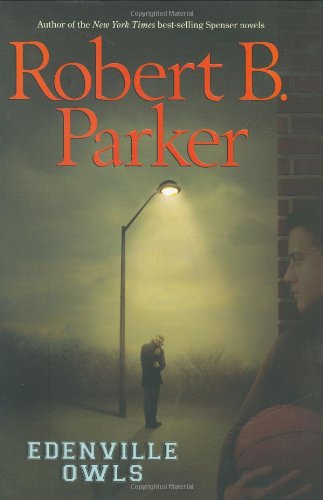 Parker, the bestselling author of detective novels for adults, brings a healthy dose of noir to his first outing for children, set in the years following the end of WWII. Narrating is Bobby Murphy, an eighth-grader at Center Junior High in a town called Edenville. His school lacks a gymnasium, so Bobby and a few close friends start up an informal rag-tag basketball team, which plays against teams from other local junior high schools. As the Owls—the group's chosen team name—improve their skills in their quest to win a statewide tournament played at Boston Garden, Bobby's relationship with longtime friend Joanie Gibson begins to grow, causing tension with his teammate, Nick, who's interested in her romantically. Additionally, Bobby finds himself wrapped up in a mystery involving his new, young English teacher, Miss Delaney; one day, while staying late, he sees a strange man being rough with her outside the school. He scares the man off, but despite her insistence that he drop the matter, Bobby investigates further with the help of Joanie and his teammates. They unravel the secret that Miss Delaney is hiding, and Bobby discovers a world of suburban white supremacy and neo-Nazism. Though Parker saturates his writing with period slang and details, the book holds a timely resonance as Bobby strives to act in a noble, moral way in a confusing post-war era. Ages 10-up.