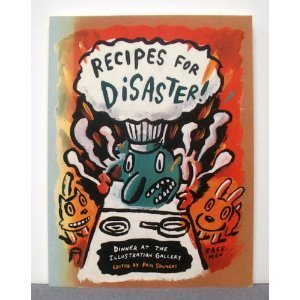 Sommers, who runs the Illustration Gallery in New York, showing the work of illustrators only, invited more than eighty artists to provide pictorial recipes for this book. Some of the concoctions are intended to be edible, finally--some not. But, considered together, they induce the foraging instinct. Henrik Drescher's, ``How to Cook,'' for example, begins: ``Start with one right lobe full of reckless abandon,'' later advising, ``thrust dash of mutability (inward)'' and ``gell throbbing ego,'' and concludes, ``serve hot or chilled (sleep).'' Like most of the contributors, he liberates food from assumption, and follows his own advice to the maximum. The book is probably more playful than any others taking on gastronomy, and for that we may be grateful. Also for Ed Koren's confession, ``My Problems--A Hearty Stew,'' for Lisa Adams's ``Protestant Pasta,'' and for the recipes for playdoh (Marc Rosenthal), for Elvis Presley's favorite (fried peanut butter and banana sandwiches, by Isabel Samaras), for ``recycled sex wax'' (Robert Neubecker) and, of course, for success (Paul Meisel). With its wit, wildness and graphic excitement, the collection sets a new standard. (Apr.)
close
Details