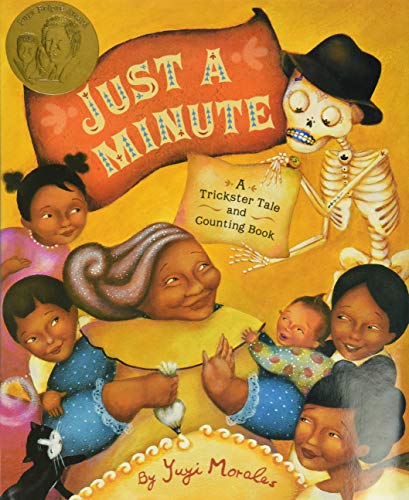 JUST A MINUTE! A Trickster Tale and Counting Book

When Señor Calavera, a dapper skeleton in a bowler hat, comes to call on Grandma Beetle, she puts him off with her quick thinking and her charming manner. "I will go with you right away," the pokerfaced, pleasingly plump woman promises. "I have just house to sweep." After waiting patiently, Señor Calavera counts, "UNO One swept house," and assumes they will exit in short order. But the wily matriarch has a houseful of bilingually enumerated items with which to stall him (three stacks of tortillas to make, seven piñatas, etc.) and soon recruits the bony fellow to help. And with good reason: her nine ( ) grandchildren are coming over to celebrate her birthday. Finally, having kissed all her grandchildren goodbye, Grandma announces that she's ready to go—but Señor Calavera has had such a good time as the party's 10th guest that he has already exited, leaving only a note that he'll be back for her party next year. Like the best folktales, the darker motivation for the skeleton's visit remains elusive for youngest readers, and the sly interplay between hostess and visitor makes light of his role. Morales ( ) whips up a visually striking book, and funny to boot. Her deep, glowing pastels and stylized human characterizations beautifully conjure the traditions of Latin American muralists, while Señor Calavera's ghoulish, goofy gallantry would make him the comic lead of any Day of the Dead festivity. Ages 4-8.