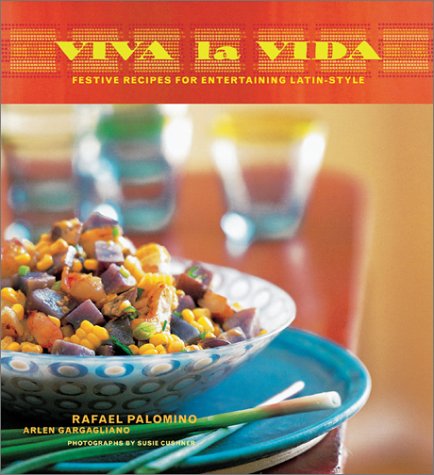 Nuevo Latino cooking is still waiting for its breakthrough cookbook, and while this effort from Palomino () and writer Gargagliano lacks the heft needed to serve as a thorough exploration, it does open up new territory with fun, straightforward recipes. Palomino is a native of Colombia, but he has an enthusiasm for all the cuisines of Latin America, from chunky Palomino's Guacamole from Mexico to Sparky Peruvian Potato Salad with mangos and corn. He offers some appealing fusion, too, in the form of Asian Ceviche with soy sauce and rice vinegar and Tuna and Chipotle Burgers that he suggests be served at a Super Bowl party. As user-friendly as this book is, with its brightly colored layout and clearly written recipes, it does require some hard-to-find ingredients, like the malanga required to make Sea Scallops with a Malanga Crust and the panela (Colombian brown sugar) called for in Roasted Squab with Black Pepper and Panela. However, substitutions are offered, as is a list of mail order sources. Desserts include Fried Spanish Doughnuts with Dulce de Leche Sauce, and Dark Rum and Pineapple Upside-Down Cake, and what could have been a throw-away chapter on drinks is instead a source of all kinds of traditional and nontraditional cocktails such as Cuban Mint Cocktail, Mango and Lemongrass Sangria and Passion Fruit Margarita.