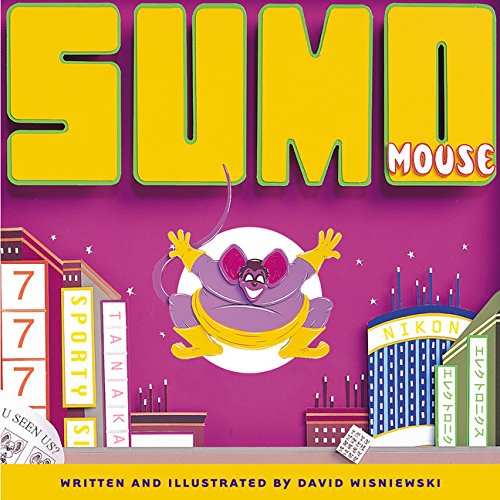 This book's endpapers trumpet a corny musical theme, performed by a parade of grinning mice: "If Mount Fuji blows its stack,/ If a monster should attack,/ Don't just hide inside your house!/ Give a call for Sumo Mouse!" The superhero jingle sets the mood for a mock-dramatic story about a "chubby champion of justice," an enormous purple mouse with a topknot and yellow trunks. Sumo Mouse makes his home in Tokyo, where smaller, skinnier mice are being abducted. He knows that a cat mafia runs the mousenapping ring, to keep Tanaka Toys in business. "We can't make squeaky toys without squeaky mice," growls the cats' leader. Meanwhile, down at the wrestling arena, Sumo Mouse turns out to be not a real sumo champion or , but a scrawny barber named Yama who "trained to be a like his forefathers. He mastered every thrust and throw, but never grew in body." When his friends are threatened by the cats' diabolical invention, none other than a sumo-wrestling mouse, Yama climbs into his fleshy Sumo Mouse exoskeleton and leaps into battle. The late Wisniewski () takes his cues from monster cinema and comics. His high-anxiety plot is so loose that it threatens to disintegrate, but his multi-paneled spreads and signature cut-paper illustrations are layered with explosive activity. And he sustains the–style hilarity as Sumo Mouse saves the day. Ages 4-8.