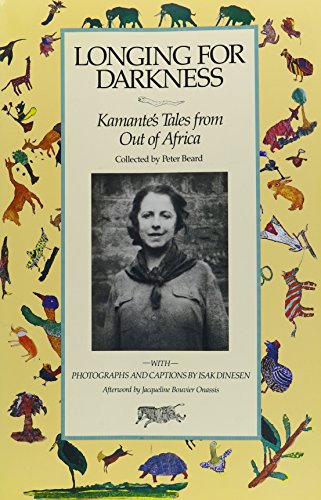 This book tells of the friendship between Isak Dinesen and Kamante, who served as the writer's majordomo during her years in Kenya. Kamante's narratives, translated from Swahili by his sons, are interspersed with photographs by Beard ( Eyelids of the Morning ), an acquaintance of Dinesen's, as well as others from Dinesen's own collection. Although many of these tales will be familiar to readers of Out of Africa, in Kamante's sweetly naive voice, they take on a lovely fable-like quality; indeed, some of Kamante's animal fables are included. Quotes from Dinesen's work provide a sophisticated contrast to Kamante's unrefined prose. Of particular interest are the African's memories of his father who, in escaping the wrath of the chief of his tribe for a wrong committed by one of his sons, ended up ``by accidents'' sic at Dinesen's farm, and of Chief Kinyanjui himself, the sire of so many offspring that ``you could see about sic hundred children calling one person daddy, for they knew their father.'' Originally published here in 1975, the book also contains a number of Kamante's whimsical drawings and watercolors. (Dec.)
close
Details