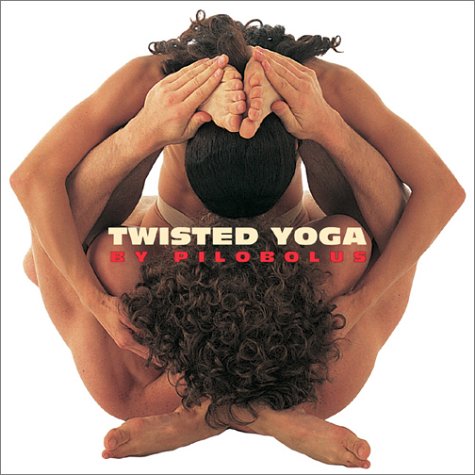 This volume does not feature ordinary asanas. In fact, according to the opening note, "It isn't even really yoga." This mind-bending collection of photographs and word play, presented by Pilobolus—the internationally renowned dance company—puts a modern spin on the ancient Hindu practice. "Sitting Shiva," for example, shows a man in full lotus, arms outstretched, forming a mudra (fingers fanned and curved, with thumb and third finger forming a closed circle) with each hand. A second set of arms (which belong to the person seated back-to-back behind him) makes him appear multi-limbed. A third person, seated in an identical position, balances atop his head. The result: a visual pun that blends the many-armed Hindu god of destruction and regeneration with the traditional Jewish period of mourning. Kane uses a slightly blue-hued lens for another, more straightforward pun, "Peacock"; a man lies on his back with legs extended in a right angle to the floor, his feet balancing two women, back-to-back, their legs outstretched in a fan to form the bird's feathers. Set against stark black or white backgrounds, Kane's transcendent images of the colorfully—and sometimes scantily—clad "Piloboli" (dancers) in action elevate viewers to a higher state of consciousness. This tastefully designed volume will be just as appealing to adults as to erudite teens. Ages 14-up.