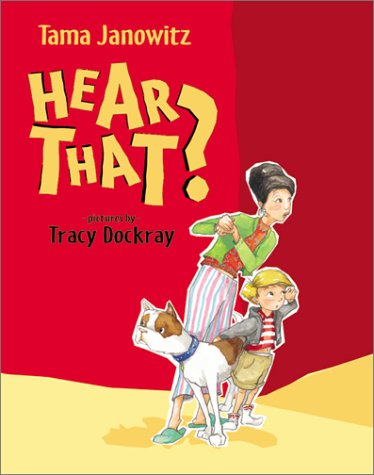 This rather bland dialogue between a mother and son begins in a dim living room, where a TV illuminates the remains of dinner. In the doorway to an untidy hall, the ominous words "buzz, buzz, buzz" appear. " 'Ssshhh,' I said. 'Hear ?' 'Yes,' said Mom. 'Maybe it's Daddy.' " The two investigate, but find only castoff toys and a banana peel. When the earnest narrator suggests that the buzzing could be a fly, his pert mother initiates a game, saying, "No... Hear ?" A "squeak, squeak, squeak," written in spiky black letters, emanates from the bedroom. Accompanied by their puzzled dog, the mother and son tiptoe around the house, alert to every thump, click and squish ("Maybe it's our wombat....Or even our kangaroos!"). Novelist-turned-mom Janowitz () escalates the sequence into nonsense, then shows that the first guess was right. The child's grinning father bursts in with a dripping umbrella, and his wet appearance suggests that a storm produced the mysterious sounds. Dockray () characterizes the family as wide-eyed and wholesome, and depicts a sloppy home where ants devour a leftover jelly sandwich and a walrus tumbles out of the fridge. With the possible exception of the "ginip-ginop," a bearish purple monster that fills an entire spread, the fantasy noisemakers amuse rather than frighten. This tepid tale's suspense depends on read-aloud performance, ideally on a rainy evening. Ages 5-8.