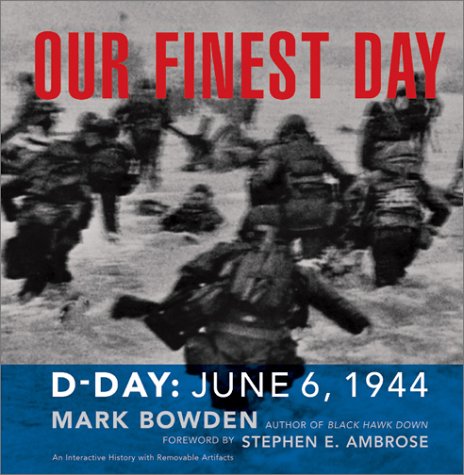 Both Ambrose and Bowden have been in the news lately, Ambrose for allegations of plagiarism and Bowden as the author of the now screen-adapted . Ambrose's contribution is minimal, a brief foreword that sets the stage for Operation Overlord, as the D-Day invasion was called. Bowden's text for this vivid, thick-paged picture book is peppered with first-person accounts of the event by journalist A.J. Liebling and other enlisted men, but is sometimes hard to read among the photos and illustrations. Produced in conjunction with the National D-Day Museum in New Orleans, the book is chock-full of D-Day mementos tucked into Griffin & Sabine–style compartments—from Eisenhower's handwritten notes to the troops to a replica of the tag on a grenade pin. Highlights among the texts included in pockets and fake manila envelopes are a disarmingly quaint "Pocket Guide to France," with line drawings and common French phrases on the back; a reproduction of the front page of the from June 6 with news of the "Great Invasion" in bold letters; and the Operational Orders for the 29th infantry division, stamped "top secret" in red across the top. The overall tone is appropriately patriotic and solemn, evocative of a time when men were men and invasions were invasions.