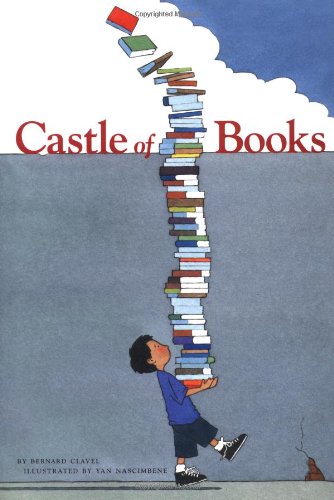 An enterprising boy builds a castle out of books in this fanciful tale, which shouts with potential but never quite finds its voice. As young architect Benjamin works in secret, his bibliophilic father, busy writing a 4,512-verse poem, does not notice that the large castle taking shape in their small courtyard is constructed with tomes from his colossal collection. French author Clavel's story line progresses through lengthy chunks of text while Nascimbene's () watercolors excel at concisely linking the boy's lofty construct with its earthbound components. His rectilinear forms and contrasting use of light and shadow showcase the rising tower of books against the drab city walls. As Benjamin's father unwittingly removes books from the castle walls, he leaves a series of "slender beam[s] of light," creating an almost mystical scene of the castle interior. Despite the unique perspective and depth of the paintings, some seem incompatible with the text. For instance, after mice nibble the father's discarded-in-frustration poem, they recite it, but the facing illustration is of an empty, darkened courtyard. Following the recitation, father and son both realize that, "Like the books in Benjamin's castle, the words worked together to form something magnificent." Unfortunately, the illustrations and text of this quirky tale do not do the same. Ages 4-11.