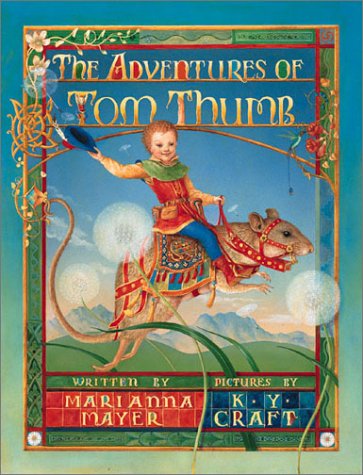 THE ADVENTURES OF TOM THUMB

In this collaboration from the creators of , Mayer's animated retelling of Tom Thumb's adventures and Craft's affectionate portrayal of the cherubic yet impish hero make for an enjoyable, if disjointed, read. In the time of King Arthur, Merlin uses his magic to grant Tim and Kate a son no bigger than Tim's thumb. In spite of the boy's protection by his fairy godmother, Tom Thumb endures a number of mishaps because of his size (he is swallowed three times) but survives to vanquish the fierce giant Gembo from the land. For this King Arthur knights him: "Sir Tom Thumb—evermore the smallest and the boldest of the crown's protectors." Craft's renderings of architecture, dress and border art, inspired by 12th-century manuscripts and illustrations, capture both the grand and comic elements of the story. Scenes of a humiliated knight returning to the Round Table with the giant's bites taken out of his sword and shield or of Tom escaping down Gembo's mountainous shoulder will tickle the funny bones of many readers, while the diminutive fellow's reunion with his parents ends the volume on a note of happy recognition. Mayer's effort to form one coherent story out of a number of different episodes is not always smooth; still, this charming rendition does a nice job of introducing a classic character. Ages 5-8.