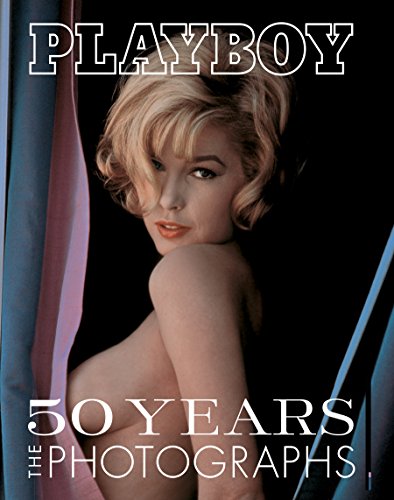 You mean people don't read for the Nabokov stories and hard-hitting reportage? Sturdily produced, this is a candy-colored, unpretentious gaze over a half-century of nudity, fun, sex and the most absurd fashions this side of Cukor's was genuinely shocking in its youth, but these 250 color pictures, compared to what's out there now, emphasize control and stardom. Here's the first centerfold, Marilyn Monroe, as the "Golden Dream." Here are Ursula Andress, bent in half like a cupid's bow; Pamela Anderson and Dorothy Stratten; the sensational Russ Meyer "actress" Edy Williams floating across the sinuous blue of the perfect swimming pool. Herb Ritts's photographs of the models Stephanie Seymour, Cindy Crawford and Elle Macpherson are suitably iconic, as are David Bailey's tawny Catherine Deneuve and Chris Von Wangenheim's Raquel Welch in blue, black and white. The text is a second thought indeed, but it's serviceable, the work of longtime staffer Peterson. lured some great artists into its pages, including Warhol, Antonioni, Helmut Newton and Brett Weston, but judging from what's here, none seem to have done their best work for the magazine. On the whole, is largely unpretentious—with one exception, trying to persuade us that the "triptych" of black-and-white head shots that lines the bottom of the opening page to each Playboy Interview is somehow some new kind of art form. In truth major innovation was the centerfold, unfolding out of the book as though too big for its britches.