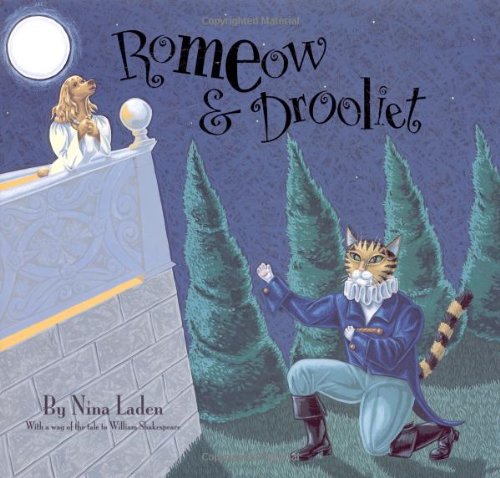 In this dubious spoof, Laden ( ) gives the Bard's tragedy a happy ending and cats-versus-dogs households. Romeow, a cat belonging to the Felini family, hangs out at the park with his cat buddies. Sometimes they taunt Turbo (i.e., Tybalt), a Rottweiler owned by the Barkers. When Romeow and friends attend the Barkers' costume ball, Romeow spies Drooliet, a cocker spaniel in an angelic white dress. "Drooliet, now there's a name that I'd drool over anytime," he purrs. Later, the heroine clumsily paraphrases the "rose" soliloquy ("If you were a creature of any other name,/ It would still make my tail wag"), and Romeow proposes. After a secret wedding ("You may lick the bride"), their interspecies romance nearly is cut short when Romeow fights with Turbo and—in another departure from the source—gets taken to the pound. There will be no homicides or suicides, although Drooliet does get hit by a car (offstage), and Romeow saves her with "one of his nine lives." In awkward gouaches, Laden pictures the star-crossed, bipedal cat and dog in garish clothing, and unnecessarily complicates matters by suggesting that humans witness the action. Literary allusions abound in the flat-footed choruses and plot points, but the name games and wooden dialogue will be lost on children unacquainted with the play. Ages 8-up.