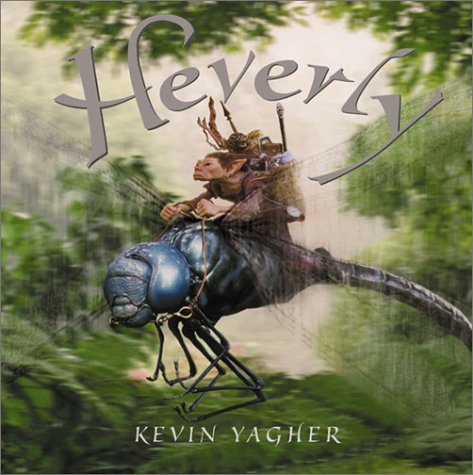 Creepily realistic, the photographic tableaux that illustrate this otherwise mundane tale are hard to resist. Hollywood special effects whiz Yagher here creates a miniature world peopled by elves, witches and fantastical creatures, and his expertise offers a particularly cinematic fillip. The story follows the well-worn quest track. Prince Eli abandons his homeland of Heverly with his ladylove, a servant's daughter of whom the king disapproves. But when Eli receives word that his father has become "gravely ill," he returns to help save the kingdom from his scheming uncle, hopping a ride on a dragonfly messenger-cum-helicopter (with a secret identity). The miniature characters, photographed against realistic settings of the forest, mountainous terrain and campfires take on nearly a three-dimensional quality, as the heroes battle flying spiders, a three-headed golden serpent—and the treacherous uncle. Ultimately, Eli realizes that the power to save his father and his kingdom lies within himself. Despite the trite plot and stilted dialogue ("You have always taught me that death is nothing to fear"), the nonstop action generates genuine excitement. The star attractions are Yagher's expressive characters and highly detailed, beautifully lit scenes—from a magical underwater ice cavern to the grim Valley of the Skulls. Ages 7-10.