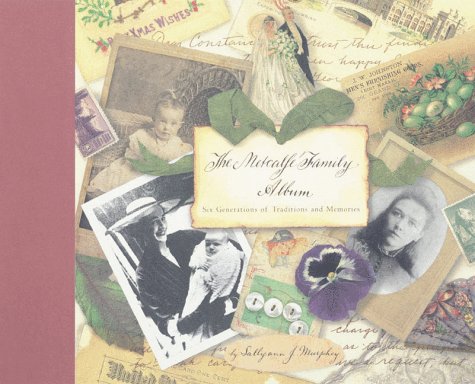 The Metcalfe Family Album: Six Generations of Traditions and Memories

When Jan Andersen, raised in a lonely, single-parent household, marries into the Metcalfe clan, she is given responsibility, as the ""new mistress,"" for the Metcalfe Family Album, which has documented the clan's life, updated virtually every Christmas, since 1835. The lavishly illustrated book, which simulates a real album in appearance and layout--it is a m lange of sepia-toned pages, old-fashioned photographs, letters, recipes, crafts and memorabilia--follows six generations of women, beginning with Marianne, who arrives from France alone at age 12, later marrying Joshua Metcalfe and settling in Georgetown, Ind. There, she begins the album, a record of life events, household chores and favorite recipes--even a few thoughts and feelings. Successive diarists are women who marry Metcalfe sons and add their stories: starchy Constance; German-born, Vassar-educated feminist Anna; shy but spirited Irish Kathleen; British war-bride Jessie; and finally Jan, taking the reader through 1996. Their domestic triumphs and tragedies are shaped by wars (from Civil to Vietnam), deaths, births, medical and technological advances, and of course, their families, to which all the women are devoted. Little changes at the homestead, with each generation unwaveringly dedicated to their husbands, in-laws and traditions. Even in the early 1980s, Jan abandons a bright career as a TV news reporter to marry and move to the country; her entries often mention how stressful and shallow her life would have been if she'd pursued her career. Women who don't share that opinion may not be impressed with the treacly domestic tales and their attendant moralizing. Sentimentality is overworked: there's a letter in a childlike scrawl from an 11-year-old mourning her mother, and samples of children's artwork. Clearly intended for the Christmas season, the book should please readers who enjoy the comfort of family continuity and the calm treasures of hearth and home. (Nov.)
close
Details