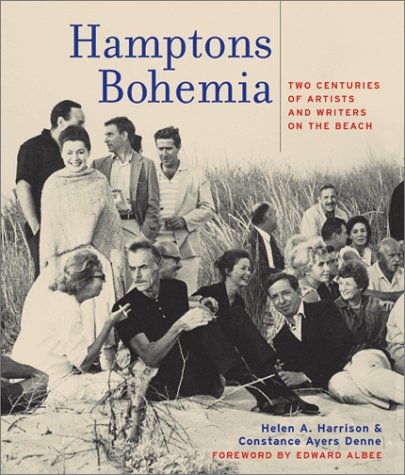 HAMPTONS BOHEMIA: Two Centuries of Artists and Writers on the Beach

Though the title may provoke a good-natured scoff in people familiar with Long Island's tony, increasingly suburban East End, this lovely coffee-table volume, which charts the area's history of "artistic and literary activity," shows how decades of luminaries found either solitude or community (or both) in this "place that engages one's capacity for wonder." Harrison, director of the Pollock-Krasner House and Study Center in East Hampton, and Denne, a professor at Baruch College, begin with the earliest known inhabitants, the Algonquin Indians, and devote a chapter on the American Barbizon painters in the late 19th and early 20th centuries, but the book's heart lies in its narrative of the writers and artists who descended on the South Fork in more recent years. From the 1940s and '50s—Fernand Léger, Jackson Pollock, John Steinbeck and Jean Stafford—to the 1960s and '70s—Andy Warhol, Roy Lichtenstein, Kurt Vonnegut and E.L. Doctorow—the authors recount beach excursions, gallery openings, art happenings and writers vs. artists softball games in breezy prose interspersed with wonderful photographs: Joseph Heller on the beach, Robert Motherwell in his Quonset hut. There's also gossip and hearsay (Willem de Kooning's daily check to see that Pollock, his former rival, was still buried in Green River Cemetery), and poem excerpts (Patsy Southgate, writing an elegy for Frank O'Hara after his death in a beach accident, longs for "those arrogant days/ before your grave"). For anyone who's ever driven east on the Long Island Expressway in summer, or wondered what life was like in "America's premier art mecca," this volume is as simple and pleasurable as a stroll down a Bridgehampton lane.