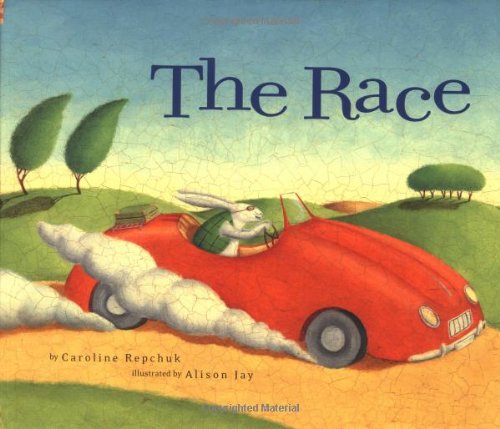 Finished with crackle-grain varnish, Jay's () droll and distinctive paintings add a winning component to this updated rendition of Aesop's fable about the tortoise and the hare. The background patterns of hairline cracks in the illustrations suggest an antique quality, as do such images as an old-fashioned hot-air balloon, a vintage ocean liner and open-cockpit planes. But Jay's playful liberties with proportion and perspective also give her work a strong contemporary feel, creating a fresh and quirky amalgam of old and new. Repchuk's () narrative, relayed in rhymed couplets of varying cleverness, is less impressive: "Tortoise and Hare each packed a case./ To New York City they decided to race," it opens. Tortoise books passage on a sturdy ship that transports him from England to Manhattan, while Hare embarks on a perilous string of misadventures. Readers will chuckle as Hare rear-ends a poodle's car in Paris, crashes his hot-air balloon in Egypt and falls out of a plane into New York Harbor, where a relaxed Tortoise fishes him out. An eye-catcher. Ages 3-6.