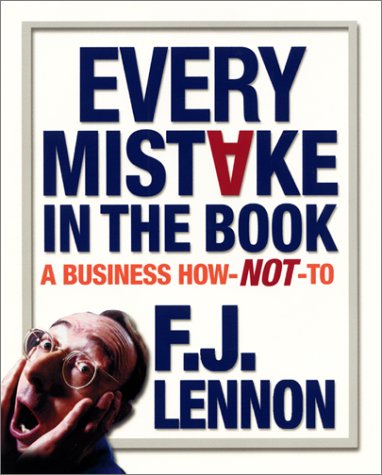 EVERY MISTAKE IN THE BOOK: A Business How-Not-To

Lennon started a computer-game business while still in college. Was he a success? Not really, he admits, because he made some of the dumbest mistakes possible. Over his nearly 20 years as an entrepreneur, he kept a journal of his experiences that evolved into this breezy, conversational book designed to keep readers from falling into the same traps Lennon has. His blunt rules regarding business basics, money issues, management, corporate politics and interpersonal skills are occasionally obvious ("Learn to listen to your employees or "It's impossible to say something stupid with your mouth shut"). But he is often insightful: "Employees feed off the emotions of their superiors. Even in times of crisis, try to be positive. Maintaining an even keel keeps morale and productivity on a steady track." And his self-effacement is funny and persuasive: "In times of crisis, I was the King Kong of negativity, the Monet of despair, painting bleak scenarios that hung like dark clouds in the office." He advocates some quite sound and frequently overlooked practices, such as frugality tempered by fairness as a manager (authority doesn't include the right to act like a dictator, he explains). The book would have even more credibility if Lennon had provided specific details about his ventures—such as their financial ins and outs—rather than using nicknames or glossing over details. Still, the book is a helpful companion to straightforward entrepreneurial titles for readers in the early stages of their careers.