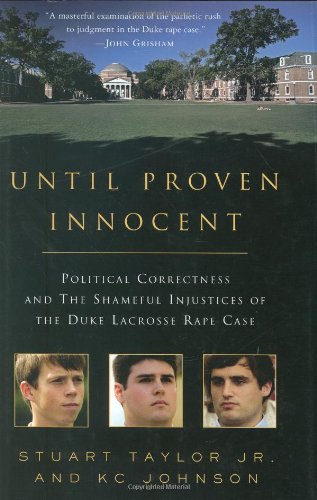 Until Proven Innocent: Political Correctness and the Shameful Injustices of the Duke Lacrosse Rape Case

Guilty until proven innocent” was a concept expressed by Duke University's president Richard Brodhead, among others, betraying a stunning misapprehension of America's justice system in the case of the Duke lacrosse players wrongfully indicted for raping a black stripper in 2006. As well reported in detail by respected legal journalist Taylor and Brooklyn College historian Johnson, the facts of the case speak for themselves: rogue prosecutor Mike Nifong willfully disregarded evidence of the boys' innocence; Duke administrators hung the team members out to dry; much of Duke's faculty and the media rushed to assume guilt in the racially charged case (the comes in for special opprobrium). But these facts are embedded in repetitiously hammering home the basic points, sarcasm and ranting against the “political correctness” (i.e., obsession with the race-class-gender triad) of academia and the media. The authors challenge the academic credentials of the black faculty members who attacked the team and criticize the 's Selena Roberts for choosing to live in “lily white” Westport, Conn. In total contrast, the closing chapters offer balanced, tautly argued discussions of, and remedies for, the central problems: prosecutorial abuse, the frequency of false rape accusations and academic groupthink. 8 pages of color photos.