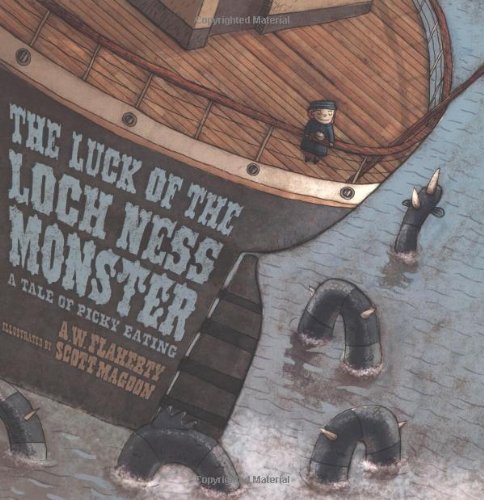 The Luck of the Loch Ness Monster: A Tale of Picky Eating

Mark Twain would have approved of this tall tale, which posits that the Loch Ness monster began life as a “tiny sea worm... no longer than your thumbnail.” Luckily for the worm, an American girl named Katerina-Elizabeth travels to Scotland on an ocean liner in 1925. “Katerina-Elizabeth found, sadly, that her parents had ordered oatmeal for her every day,” and she prefers other provisions. Under the baleful eye of a Charles Addams–ish waitress, the picky girl jettisons bowls of oatmeal into the sea, and the worm enjoys many hearty breakfasts. Magoon ( ) renders these scenes in a '20s palette of sepia brown, murky gray and briny green, showing the worm becoming a large, snakelike creature that ripples alongside the ship. At the destination, Loch Ness, the monster-to-be misses Katerina-Elizabeth but gets a pleasant surprise: “All along the lake the next morning, the worm heard the plop of oatmeal being hurled by children out the windows of their thatched cottages.” (Just wait 'til the tourists try haggis.) A neurologist, Flaherty ( ) spins her debut children's yarn in a deadpan voice that gives added oomph to her hyperbole (Nessie grows “as long as the main hall of an elementary school”). Her wry tone and Magoon's droll watercolors lend unexpected charm to the mystery monster, so fond of good nutrition and so helpful to finicky eaters. Ages 4-8.