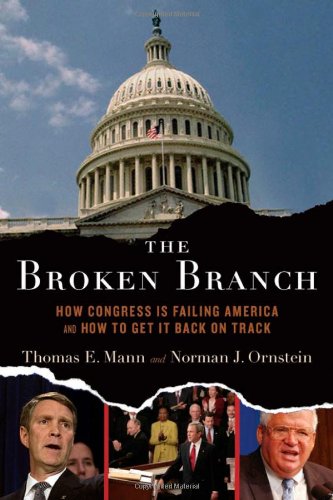 The Broken Branch: How Congress Is Failing America and How to Get It Back on Track

Until recently, one could be forgiven for thinking that the present Congress is essentially an arm of the Bush administration, according to Mann and Ornstein, nationally renowned congressional scholars from the Brookings Institution and the American Enterprise Institute, respectively. Their book argues persuasively that relentless partisanship and a disregard for institutional procedures have led Congress to be more dysfunctional than at any time in recent memory. Looking back to the arbitrary and sometimes authoritarian leadership of Democratic speaker Jim Wright and the Abscam scandals of the 1980s, the authors demonstrate how they presage the much worse abuses of power committed by former House Majority Leader Tom DeLay and superlobbyist Jack Abramoff. In outlining more than 200 years of congressional history, Mann and Ornstein sometimes allow just a sentence or two to explain the policies and philosophies of an important politician or even an entire party, even as they catalogue deviations from obscure points of procedure in extensive detail. Their book may be useful and enjoyable to the specialist, though recent conservative pushback on issues from the Harriet Miers nomination to warrantless wiretapping and immigration will make some wish the authors had had the opportunity to add a postscript.