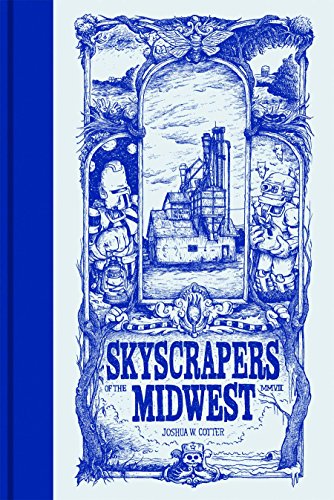 Skyscrapers of the Midwest

The collection of Cotter's serial comic book is a meditation on the pains and anxieties of childhood and the way the fantasy lives of kids bleed over into their day-to-day existence, and it's played anything but straight: every image and incident is translated into a set of resonant visual metaphors. Cotter's protagonists are a pair of anthropomorphic cats (as opposed to the real cats who show up partway through the story)—Midwestern kids, bored and frustrated with the humiliations of school, imagining their lives in the language of superheroes, dinosaurs and giant robots, furious about the religious guilt that's been indelibly pounded into them. The early sections owe a major debt to Chris Ware, with their mocking reconstructions of cheery comic-book ads and minutely observed pathetic loathing, but by the end, the book becomes a genuinely insightful observation of the way commercial fantasies can shape young, lonely people's personalities. The squat, puttylike characters and settings that Cotter constructs with wobbly but meticulous cross-hatched textures give his story a lovely sense of gnarled intimacy, and it doesn't take long to start parsing his peculiar visual grammar: the sequences in which one character's migraines are shown as a locust that slowly descends into her head are devastating.