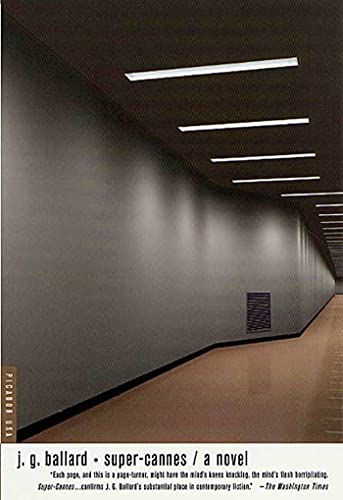 The connoisseur of the bizarre (, , etc.) turns his attentions to the globalized corporate elite in his 26th book. Crippled aviator Paul Sinclair ("I counted the titanium claws that held the kneecap together") accompanies his young wife, Jane, to her new posting at a luxurious corporate park on the French Riviera. A manicured paradise of multinational conglomerate HQs and their executives' villas, Eden-Olympia (which the author has modeled on the current business parks of Antibes-les-Pins and Sophia-Antipolis) is managed by a seductive yet sinister psychiatrist named Wilder Penrose, who ensconces the Sinclairs in the house of a former local doctor named Greenwood, who one day went on a suicidal murder spree, leaving 10 dead. In short Ballardesque order, the Sinclairs become estranged from one another: Jane falls into heroin-fueled ménages with the Belgian couple next door; Paul takes up tranquilizers and trysts with an Eden-Olympia vamp. Paul becomes obsessed with unraveling the mystery of the massacre, coming almost to identify with Greenwood. His efforts eventually reveal the horrifying true nature of Eden-Olympia, where the most bestial drives of corporate executives are harnessed in Brownshirt-style "therapy sessions" to create optimum working efficiency. Paul's collision course with the psychopathic Penrose is a new twist on Ballard's weird neo-romanticism, whereby our self-defining "latent psychopathy" is put to use to save society rather than to revel in hedonistic defiance of it (à la ). Ballard actually seems to have penned a story with a clear-cut hero (if the reader overlooks Paul's drug use and pedophiliac urges) and villain ("I don't want to start a race war—or not yet"), with the fate of civilization in the balance. This novel, for all the author's trademark grotesqueries, may be Ballard's most commercially viable yet.