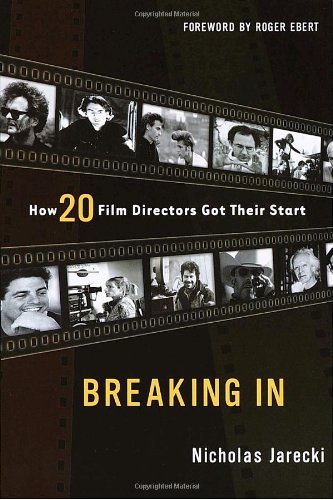 BREAKING IN: How 20 Film Directors Got Their Start

Young NYU film school graduate Jarecki began this project as a "selfish" endeavor (he wanted to know how he could get his own start), but it evolved into an expansive collection of interviews with three generations of directors about how films are conceived, shot and distributed. The directors included span decades and genres, from John Schlesinger () to Amy Heckerling () to Ben Younger (), but nearly all agree on the need for perseverance and the belief that writing a good script is, as Younger says, the "easiest and most direct route to success." These directors generally praise film programs, like those at Columbia, NYU and AFI (American Film Institute), as training grounds, and they view Sundance and other festivals with both starry and jaundiced eyes. Aside from offering advice, the book also provides directors' views on the purpose of filmmaking. Edward Zwick () sees film as a way to communicate feelings and "organize" experience; Peter Farrelly () considers it "telling a good story." Like a fine movie, the book generates memorable images, including Farrelly frozen by fear in bed before his first shoot and a teenaged John Dahl () trying to seduce a girl at a drive-in showing . For future filmmakers, the book grants an extended community; for movie fans, it encourages faith in future films made by directors like Brett Ratner () who aim to inspire people, because "that's what movies ultimately are supposed to do."