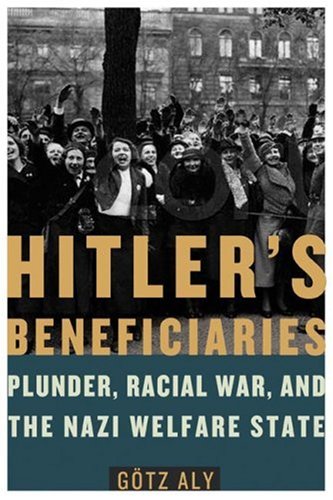 The publication of this book in Germany inspired a huge controversy. In an important, original contribution, Aly, the author of a number of major works on the Third Reich and the Holocaust, argues that the Nazi regime plundered the rest of Europe during WWII to the great material benefit of the German population. Germans lived quite nicely from the sausages, furniture, shoes and even Christmas geese that millions of German soldiers and SS men sent back home from all over Europe. Plunder by official state agencies also financed the war. These points hardly seem revelatory or controversial, but Aly, as is his style, pushes the argument to the nth degree, supporting it with a wealth of documentary detail. The crimes against humanity committed by the regime were not, he argues, the work of a few individuals or an evil external to the population and the course of German history in the 20th century. Rather, the Nazis met the population's overwhelming desire for material security and an improved standard of living. The Nazis redistributed wealth in favor of the lower classes and opened up avenues of social mobility for them. The Holocaust, then, was not just a result of the ideology of anti-Semitism but also of the policies of plunder that won the regime the support of the vast majority of the German people.