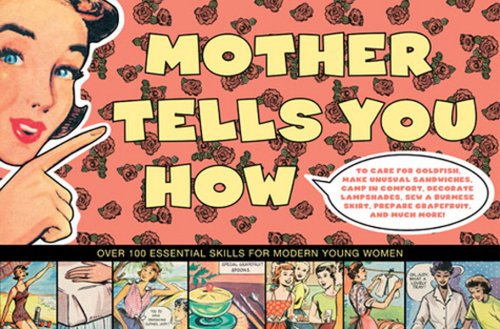 Mother Tells You How

This selection of advice-comics published in the British journal, in the early 1950s is a sweet mix of nostalgia and helpful advice. There's a quaint segment on how to decorate for the coronation (of Elizabeth II): “why not... a huge coronation cake?” But “Grannie's Scorch Mixture,” used to remove mild burn marks from overironed shirts, is a recipe people will want to write down. Plenty of advice on how to refurbish old dresses may become useful again, depending on the economy. The book harks back to both the postwar era and a time when between economic straits and postwar rationing, “women's work” really mattered in keeping a household going. The artwork, which like the text is uncredited, is very '50s without being cloying or misogynist, surprisingly. Overall, it's warm and kind, and likely to find a varied group of readers: women who do crafts, conservative religious women, but also younger women and girls who, like much of the j-pop crowd, are into making their own things. (For instance, it wouldn't be surprising if Lolitas discovered this book.) It's lovely to see things like baked Alaska made simple and advice on how to make your own cheese straws, which probably beat Cheezits any day.