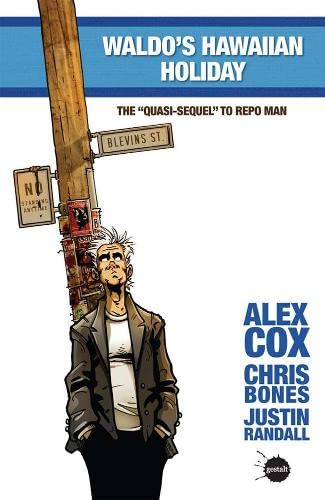 Based on a script that never got filmed, Cox’s long-overdue sequel to his cult classic film is every bit as fractured and uneven as its predecessor, but it too has its own kind of loopy charm. Protagonist Otto (who now believes his name is Waldo) finds himself in a late-’90s American city that looks like a composite of a dozen stereotypical war zones, the last 13 years of his life gone from memory. His dreams hint at a recent stay on Mars, but he’s too busy trying to eke out a living in a city that doesn’t bathe to pay them much attention. Between jumping from one dead-end job to another, and jumping in and out of bed with inscrutable hottie Velma, readers get hints of overarching conspiracies and alien puppet masters. Hints, but not much more—by book’s end just as many questions are left unanswered as answered. Still, it’s a ride that should appeal to fans of the original, and Bones’s overly colorful and densely chaotic visual style gleefully explores this mess of a world Cox has so lovingly built. The script’s jabs at American consumerism, which have Waldo falling for every buy-now-pay-later sales pitch imaginable, resonate particularly well.