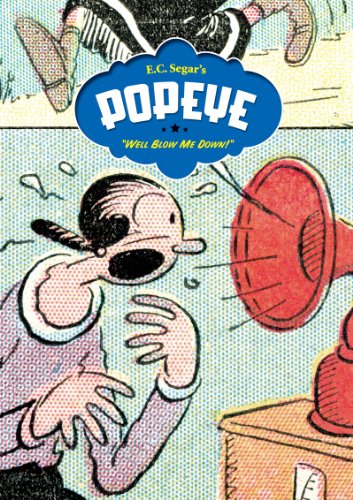 Looking back to an era when “comics” were mainly about being funny, this lovingly produced coffee-table volume in the Complete Popeye series reprints strips from 1930 to 1932, in both color and black and white. By this time, the original leading characters of Segar’s troupe had become a supporting cast for the one-eyed, cantankerous sailor with an odd sense of chivalry, a love of spinach and a massive pair of fists. In this volume, Popeye and his “sweetie,” the gangly spinster, Olive Oyl, subdue western bad men and settle the war between Tonsylania and Nazilia, while enjoying their testy courtship. Readers won’t find the two-page spreads and camera angles they’re used to in modern comics, but a rich, colorful soap opera full of wonderful moments. They won’t run into much pretentious social commentary, either, though the episode in which Olive’s brother, Castor, and Popeye open a One-Way Bank to give away money to needy people may have felt especially relevant during the Great Depression. Mainly, Popeye just punches out any guy in his way, the more pompous and tough-looking the better. As he tells Olive, “I yam what I yam an’ tha’s all I yam!” Segar’s wildly fertile imagination is more than enough.