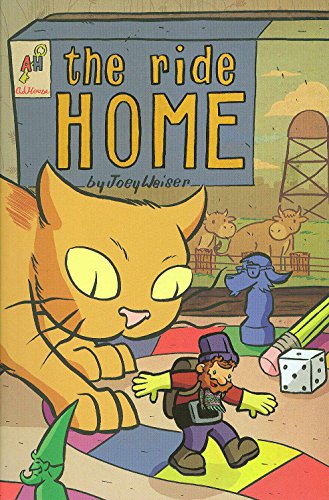 A little story about a gnome named Nodo who's lost his house, which, in this case, is a van. In the course of the story, Nodo's van drives off, and he goes in search of the only home he's ever known. On the way, he meets Ferdinand, the sewer dragon, and Flora, a dark-haired gnome with her own little cottage. Nodo encounters a gnome village, which is so scrupulously clean and well ordered it resembles Amsterdam. Unfortunately, life there is full of “twelve-hour work days and gnomish tradition,” so Nodo flees. He finally finds his van in a junkyard run by trolls, who then almost eat him. The art has a cartoony forthrightness, vaguely reminiscent of a child's coloring book, but it's not always clear (Ferdinand looks more like a wolf than a dragon, and the trolls are hard to place as anything more than generic baddies). A larger problem is that the story never takes off. Nodo's bumbling never becomes endearing, and the only characters that seem real are Flora and Ferdinand—one finds oneself rooting for the trolls. The story isn't hard to follow, just hard to believe in.