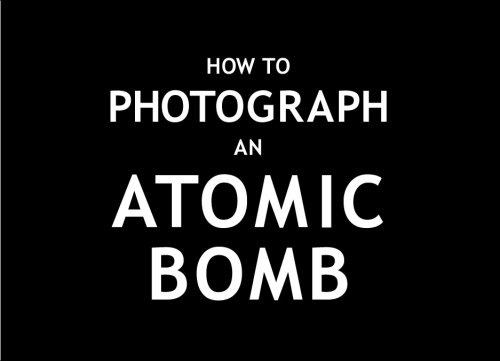 How to Photograph an Atomic Bomb

Documentary filmmaker Kuran challenges the mushroom cloud as the prevailing image of a nuclear explosion in this fascinating, if uneven new photographic compilation. Accumulated over the course of a decade, Kuran's collection ranges from straightforward bomb blueprints to jarring juxtapositions of bombs exploding against palm trees, taken during the 1946 “landmark” Operation Crossroads at the Bikini Atoll. All of his images predate 1963—the year Kennedy signed the Limited Test Treaty Ban—capturing a slice of life from a politically tense era. Kuran chooses to illustrate only a half-dozen of the more than 300 atmospheric nuclear tests conducted by the U.S. government: the most graphic shots are serial frames of houses being crushed, their roofs being blown off and structures crumbling. There are also oddly clinical portraits of swaddled photographers clutching oxygen masks, gingerly retrieving contaminated cameras after an explosion. Also of note are the vivid, full-color images of specific bombs, which stand in contrast to the telegraphic prose that accompanies them. Kuran's narrative skills may be lacking, but his sense of visual storytelling is right on target.