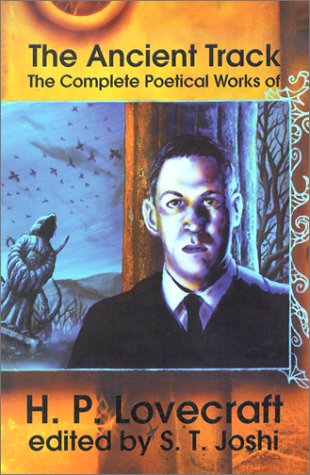 THE ANCIENT TRACK: The Complete Poetical Works of H.P. Lovecraft

Several Lovecraft poetry volumes have appeared over the years, notably Arkham House's (1963), but here at last is an attractive, scholarly edition that collects every known scrap of verse from the cosmic Yankee's pen. Joshi, author of the definitive biography, (1996), and editor of the corrected texts of HPL's fiction, has sensibly divided the book thematically: juvenilia, fantasy and horror (a relatively small portion of the whole), occasional verse, satire, seasonal and topographical, amateur affairs, politics and society, and personal. Since Lovecraft's models date no later than his beloved 18th century, his poetry as such (the bulk of it written in his amateur journalist phase, before he hit his stride as a horror writer) contributes nothing to the advancement of the form. With their archaic diction and references to obscure colleagues, some poems are well-nigh unreadable (here Joshi's notes are especially helpful), but Lovecraft's sense of humor (virtually absent in his fiction) surfaces in many lighter poems that require no annotation, while his more serious verse reveals much about his Anglophilic and conservative social and political attitudes as a young man. Also included are , HPL's one play, and a section of fragments, along with a chronology and an index of titles and of first lines. This is an essential tome for every self-respecting Lovecraftian, if for few others.