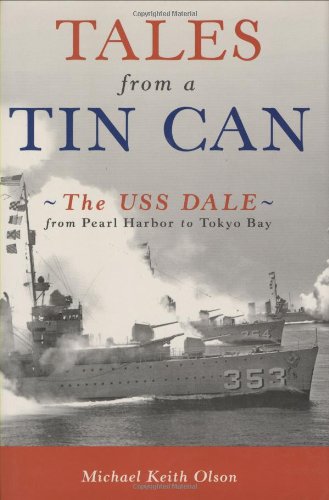 Tales from a Tin Can: The U.S.S. Dale from Pearl \t\t Harbor to Tokyo Bay

Author Olson managed to interview 44 veterans of the World War II \t\t destroyer U.S.S. (despite their average \t\t age of 88), producing the first oral history of one ship's adventures over the \t\t entire Pacific theater. Their tales produce no new insights, but their \t\t eyewitness accounts of great and trivial events are fascinating. A dozen \t\t veterans describe the attack on Pearl Harbor, which occurred all around them, \t\t leaving their ship untouched. The men also spent nine miserable months in the \t\t Aleutians in subzero weather and stormy seas with no relief; five crew members \t\t suffered nervous breakdowns. But the \t\t was a lucky ship: no sailors died in action, though all agree on the terrors of \t\t kamikaze attacks that destroyed nearby vessels. More frightening were typhoons \t\t during which everyone expected death for days on end, joining companion \t\t destroyers that sank with all hands. Between reminiscences, Olson writes a \t\t running account of the war and illuminates shipboard details readers need to \t\t know. His book is an impressive accomplishment, bringing vividly to life the \t\t actions of a single warship that fought across half the world during \t\t 1941â€“1945.