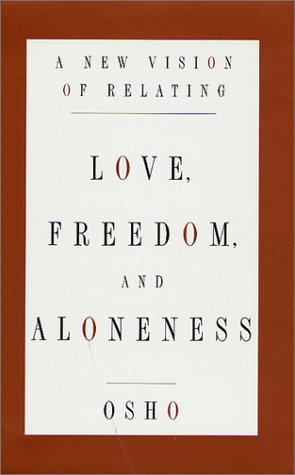 LOVE, FREEDOM, AND ALONENESS: A New Vision of Relating

The first few chapters of self-styled guru Osho's spiritual insights on love, sex and meditation are infused with an idiosyncratic but reasonably mainstream flavor. As the book progresses, however, Osho's teachings veer sharply away from conventional spirituality. In a chapter entitled "It Takes a Village," Osho envisions a future in which communes replace the family, calling this "the most revolutionary step in human history." While Osho and the Osho Commune International are briefly profiled in endnotes, nowhere is it revealed that Osho was the Bhagwan Rajneesh—the charismatic cult leader who fled the United States in 1987 and died in India three years later. Read in light of this knowledge, the book takes on a foreboding aspect. In view of the sexual practices at the Rajneeshi commune in Oregon, passages such as "Love always melts the self.... You love a woman, and at least in those few moments when there is real love for the woman, there is no self in you, no ego" seem rife with dangerous latencies. Also disconcerting is the knowledge that this collection has not been updated with Osho's later views, including the more conservative statements on sexuality that marked his much-scrutinized last years. Given the author's identity, readers might be tempted to dismiss these teachings as cult brainwashing and avoid them altogether, but there is much here to be taken seriously.