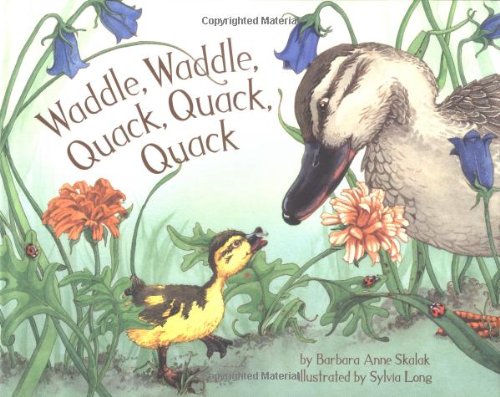 Debut author Skalak teams with veteran artist Long ( ) for a wayward duckling tale—but the book feels as wobbly as the newly hatched hero himself. The predictable, literal text (two rhyming couplets per spread) is quickly overshadowed by Long's exquisitely detailed and poignantly expressive characterizations. In one early spread, a crouching Mama Duck rushes her brood to the lake while casting a fearful eye on the hawks hungrily circling overhead. A striking close-up a few pages later shows the golden, downy duckling wistfully nuzzling a reed as he realizes he's lost track of his family. But the volume never quite evokes a distinctive personality for the family or its members, nor does it build a sense of momentum. Consequently, the lost duckling's search for his mother at the book's center feels like just another episode rather than a climatic event. After a brief, non-perilous inventory of the landscape ("Up this hill?/ Just pinecones, needles./ In this log?/ Big ants and beetles!"), the duckling reunites with his Mama and siblings in plenty of time for a night's snuggle. Long's work is always worth a look, but while the ending is reassuring, youngsters likely won't be all that invested. Ages 4-up.