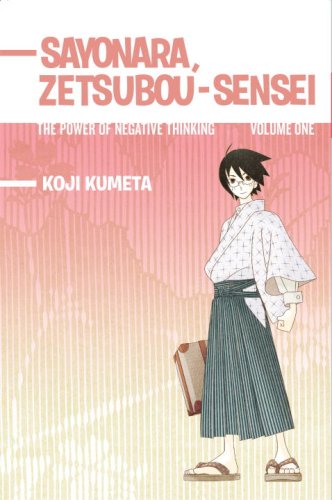 In the first chapter of this dark parody of the “teacher” genre, schoolgirl Kafuka Fura encounters her teacher on the way to the first day of school. Nozomu, whose name can be interpreted as “Mr. Despair,” is in the midst of attempting suicide among the cherry blossoms. Kafuka decides her new teacher is trying to “grow taller,” like her parents have done on several occasions. In each chapter, we are introduced to another of Nozomu's female students, many of whom have psychological problems that double as commentary on Japanese society. Among the freaks in this “class of despair” are a shut-in ( ), a stalker, a girl who can speak only via rude text messages, a “precise” girl with obsessive-compulsive disorder and an illegal immigrant. Toward the end we are introduced to the abnormal “normal” girl. If this were or , Nozomu would solve each student's problems, but in Kumeta's cynical world, Nozomu doesn't help and often signs up his students as possible partners for double suicide. Kumeta's artwork is remarkably different from typical manga, with clean lines that look more computerized than pen and ink. Despite its dark subject matter, this tongue-in-cheek work is extremely funny.