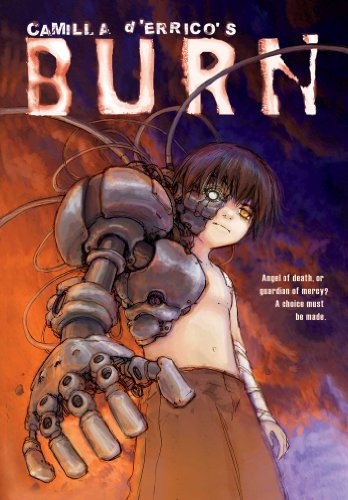 The conflict between man and machine gets a graphic novel examination in this YA adventure by painter/designer/cartoonist d'Errico. Burn is just a fun-loving, normal kid before he's caught up in a rebellion by giant robots created to serve humans, who slaughter his family and most of his friends. When Burn is injured and a mecha named Shoftiel is damaged in a fight, Shoftiel uses parts from both to create a surviving hybrid whose variant parts battle for control. This conflict is portrayed in a mental limbo where Burn and Shoftiel argue the merits of each side. Meanwhile in the real world, Burn encounters Aeya, the young daughter of Dr. Carnegie, creator of the mechas, and Kali, a tough-talking Han Soloesque female biker fleeing the battle. D'Errico's b&w art excels at strong character design and well-staged set pieces, carrying the somewhat formulaic characters, who will be no novelty to readers familiar with Astro Boy, Akira or the Matrix. Still, by spreading these influences over a wide area, emerges as a fast-paced tale that leaves lots of room for further adventures. Strong language and a few grisly images make this suitable for older readers. Ages 12–up.