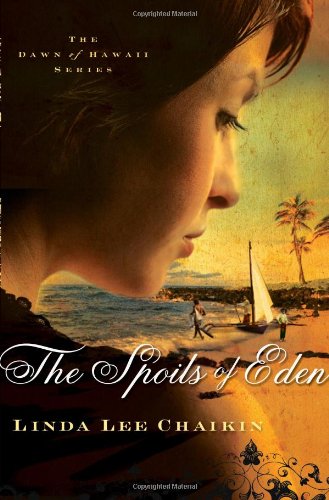 The Spoils of Eden

Prolific author Chaikin ( ) begins the Dawn of Hawaii trilogy with this novel, set in 1880s Hawaii, when the island group still had a queen and talk of annexation to the United States was a hot political potato. Leprosy is another relevant historical fact. The leper colony on the island of Molokai is where the mother of nurse Eden Derrington lives and also where baby Kip was found by his prospective adoptive father, Rafe Easton, a Clark Gable–like coffee plantation owner who is Eden's fiancé. Eden is at least as interested in helping her father, Jerome, research a cure for leprosy as she is in marrying Rafe, who doesn't want her to risk her health helping her father chase a phantom. Chaikin uses a big canvas strewn with beautiful details from Hawaii's landscape; she has also researched Hawaiian history. Her intricate plotting compensates for some clumsy writing and lack of depth in a few of the supporting characters. But fans of historicals and epics will like this new evangelical Christian take on what James Michener did so memorably for the state.