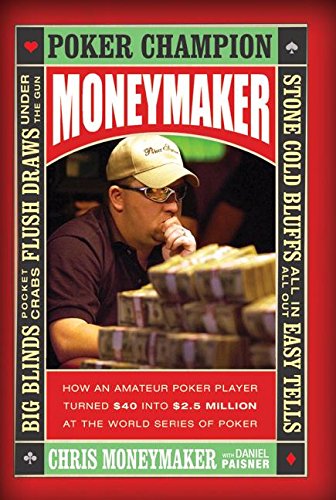 MONEYMAKER: How an Amateur Poker Player Turned $40 into $2.5 Million at the World Series of Poker

Moneymaker's improbable 2003 victory at the World Series of Poker (where he was an untested amateur player) has been seen on ESPN's WSOP series as many times as a rerun. Here, with veteran coauthor Paisner, Moneymaker (the publisher insists this is his real name) presents a blow-by-blow, hand-by-hand account of the experience. Unlike James McManus in , Moneymaker eschews analyzing the psychology and milieu of the poker world in favor of his real interest: gambling. The result is a sophisticated deconstruction of the important hands Moneymaker played as the tournament progressed, many already famous among fans of the WSOP. For connoisseurs, this offers an entertaining and insightful insider analysis that will allow them to decide for themselves whether Moneymaker was fabulously lucky or played a skillful game and thus deserved his success. For the uninitiated, the excitement of Moneymaker's progression toward the big prize will be enough to thoroughly engage. Readers also get some surprisingly candid glimpses into a gambler's consciousness—one that reflects the myth of American exceptionalism, the idea that each of us is entitled to make and to break our own rules, and to make our own luck.