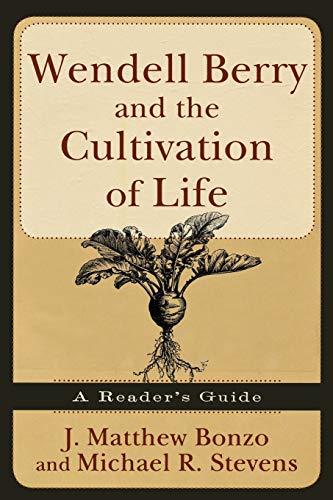 Wendell Berry and the Cultivation of Life: A Reader's Guide

Writer, farmer and cultural critic Wendell Berry is a man whose time has arrived. It only took more than 40 years for his critique of rootless and restless modernity to gather enough steam to help fuel the movement toward a greener way of life. Authors Bonzo and Stevens, both university professors, tease out the spiritual and cultural themes found in more than four decades of essays, fiction and poetry by Berry. They argue that Berry's thought spans an ideological spectrum that increases the importance and urgency of his views, and they look carefully at how his central ideas about creation, place, community and hospitality lead to individual and social health and healing. Concluding chapters apply Berry's thought to churches and higher education—both objects of Berry's criticism—to offer ideas for improving both institutions. The prose sometimes lapses into the cryptic (“the healing church becomes an embodied narrative”) that harder editing could have fixed. But Berry deserves attention, and the authors have patiently worked to enlarge the circle of those who appreciate Berry's consistent call for meaningful living.