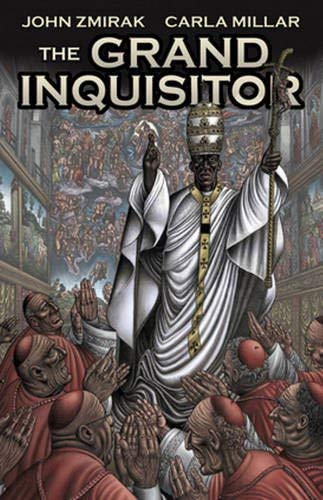 “Comics” don't get much odder that this conservative Catholic tract in the form of a graphic novel. When a priest from Sudan is invited to Rome during the Vatican conclave to select a new pope, he finds himself instead kidnapped to a mental hospital where he is threatened/tempted by an aged cardinal. The canny old man knows that the young, black prelate will become the next pope, and the cardinal wants to make sure that his long career of deliberately subverting Church doctrines won't be wasted. Thus, the story is essentially a self-justifying debate between the earnest fundamentalist priest and the slippery European autocrat, interrupted by scenes of African turmoil, liberal perversions and souls of sinners burning in Hell. Unfortunately, Millar's elaborate but stiff art doesn't suggest that her dramatically posed characters were ever alive. Nor does Zmirak's tortured script succeed as blank verse or as intense normal conversation. The result is extremely sincere, but stagy and fake, and the whole project is a demonstration of what sheer dogmatic faith can achieve—and what it can't.