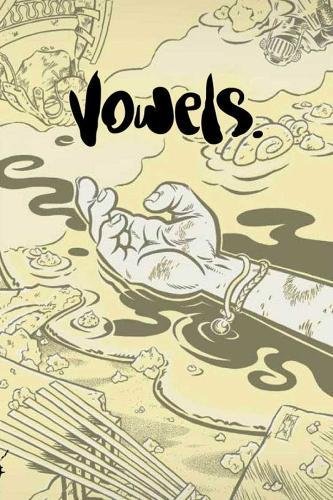 The first graphic novel by Australian cartoonist Ogden is actually a set of five short, wordless fables involving small, bug-eyed, long-armed creatures (who look a bit like one of the late Vaughn Bodé’s inventions). The first two are the simplest: in “A,” a creature is pursued by a caveman and (naked) cavewoman, who try to kill it for food; in “E,” it meets its doom in the desert, then wrestles with the difficulties of reincarnation. The other three stories are increasingly tragic, concluding with “U,” in which a city full of the little creatures is overrun by a murderous legion of hulking, ugly beasts. Ogden’s drawings are deliciously curvy and loopy (his characters’ movements obviously operate on Looney Tunes physics), and the book is full of clever bits of business, like the squalling rooster whose appearance in a few of these stories means “the next morning.” But he’s badly hamstrung by the language-free format—“I,” in particular, is difficult to comprehend—and these tales’ brutal streak isn’t quite mitigated by flashes of painful sappiness, such as a stuffed toy used as a symbol of innocence. Ogden is an enormously stylish artist, and he’s made an ambitious debut, but these parables aren’t quite worthy of his visual chops.