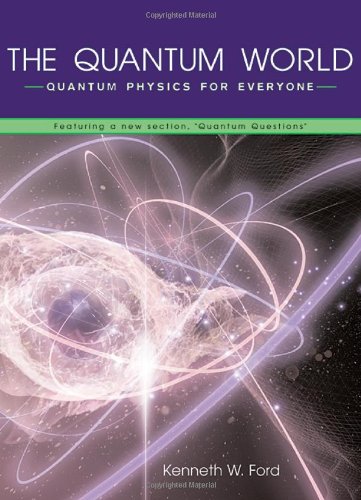 THE QUANTUM WORLD: Quantum Physics for Everyone

Albert Einstein's objections to the theoretical underpinnings of quantum physics are usually summed up in his famous quote, "God doesn't play dice." Unfortunately for Einstein, experimental evidence over the past 75 years has consistently showed that the cosmos does indeed play dice. Whereas what we can see obeys laws of certainty (we know where Mars will be in five years or when the next lunar eclipse will occur), the subatomic world obeys laws of probability: you never know for sure where an electron will be at any given moment; worse, it may be in two places at once. In this approachable book for the armchair science buff or student struggling through a physics class, Ford ( ), retired director of the American Institute of Physics, offers his services as cicerone through the subatomic world. He explains why quarks are said to have "flavors," and why scientists refer to "strange" and "charm" quarks and their being red, blue or green. Ford provides readers with a brief but adequate history of the early development of quantum theory and introduces the present-day scientists who use multimillion-dollar machines to detect particles that pop in and out of existence in less than the blink of an eye. If readers blink, they might miss the author's mention of string theory, which deserves more discussion than it receives here. Even scientists never really understand the quantum world, but this book will help readers wrap their minds around the paradoxical concepts of how the building blocks of existence lead a strange, if not charmed, life. 33 photos, 52 line illus., 6 tables.