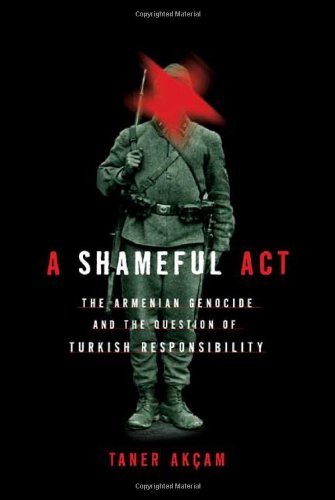 A Shameful Act: The Armenian Genocide and the Question of Turkish Responsibility

The story of the Ottoman Empire's slaughter of one million Armenians in 1915—a genocide still officially denied by the 83-year-old modern Turkish state—has been dominated by two historiographical traditions. One pictures an embattled empire, increasingly truncated by rapacious Western powers and internal nationalist movements. The other details the attempted eradication of an entire people, amid persecutions of other minorities. Part of historian Akçam's task in this clear, well-researched work is to reconcile these mutually exclusive narratives. He roots his history in an unsparing analysis of Turkish responsibility for one of the most notorious atrocities of a singularly violent century, in internal and international rivalries, and an exclusionary system of religious (Muslim) and ethnic (Turkish) superiority. With novel use of key Ottoman, European and American sources, he reveals that the mass killing of Armenians was no byproduct of WWI, as long claimed in Turkey, but a deliberate, centralized program of state-sponsored extermination. As Turkey now petitions to join the European Union, and ethnic cleansing and collective punishment continues to threaten entire populations around the globe, this groundbreaking and lucid account by a prominent Turkish scholar speaks forcefully to all.