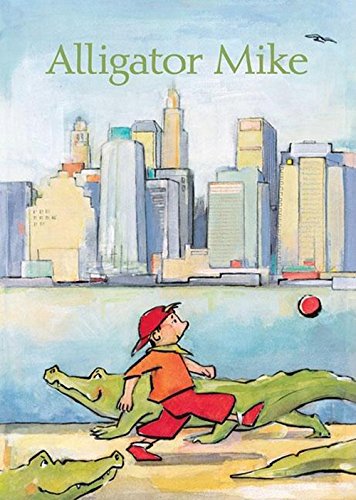 The thing that may distinguish this perky little story for older readers from a Swiss team is the remarkable resemblance of its alligators to the protagonists of . It's as if Maurice Sendak's alligator family, with their funny hats and crooked smiles, had emigrated to the sewers of New York and spawned grandchildren and great-grandchildren. In Federspiel's English-language debut, an enterprising kid in a red baseball cap named Mike offers refuge in Florida to 330 sewer-dwelling alligators, and pulls off a plan to ship them there. (When he worries about how to get above ground again to make the arrangements, his guide assures him, "There's a service entrance.") Despite some excess creativity—five creatures to lead Mike through the sewers when one would have been fine, and an invented feud between two alligator factions that plays clunkily—the escape from Manhattan is believably financed by treasure which has fallen through drainpipes ("Jewels, gold coins, walking sticks, silk shawls...") and Mike's natural boyishness makes a nice contrast to his surreal surroundings. Rappo's blocky figures, sunny colors and canny pacing form a good portion of the book's charm. Hitting a pleasing balance of action, imagination and urban legend, Federspiel's tale will brighten youngsters' bedtimes. Ages 3-up.