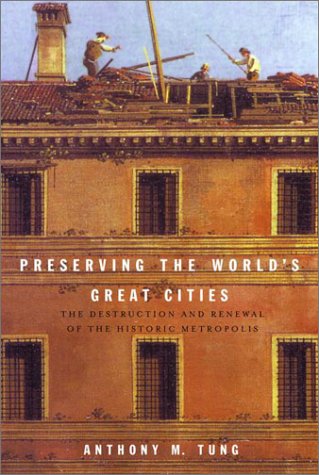 PRESERVING THE WORLD'S GREAT CITIES: The Destruction and Renewal of the Historic Metropolis

The idea of preserving the material past is not a new one—the Emperor Majorian (the Jane Jacobs of 458 C.E. Rome) issued an edict to protect old buildings—but in modern times, it has often been in sharp conflict with the contemporary forces of commerce, war and redevelopment. Tung, a former New York City Landmarks Preservation Commissioner, has written an innovative historical and theoretical study of architectural and cultural preservation efforts in 20 cities across the world. Rather then relying on one cultural model, Tung makes his argument by illuminating specific cases in context—how Amsterdam's "medieval communal water boards" set the groundwork for modern preservation; how religious warfare devastated and continues to hinder the conservation of Jerusalem; and in China and Japan, how preservation efforts focus on retaining "the original aesthetic" rather than the original building. But the common theme is the importance of cultural conservation. Tung visited each of the 20 sites himself and relies on exhaustive archival research. He presents difficult problems fairly—such as whether the Elgin Marbles should be returned to Greece despite Athenian pollution, the battle over air rights in Manhattan, and whether the reconstruction of Warsaw has destroyed the history of its destruction during the war—always attempting to find a solution that relies on common sense, historical integrity and balancing practical needs with preserving heritage. This is an important contribution not only to the literature of urban studies and city planning, but to architectural history and sociology. 75 b&w photos and 50 maps not seen by PW.