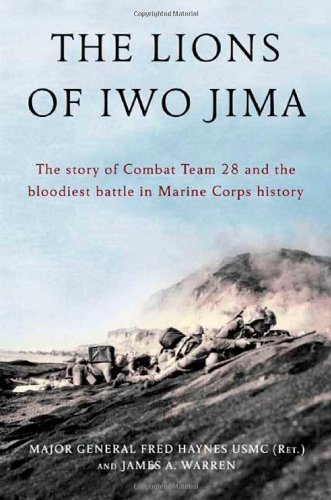 The Lions of Iwo Jima: The Story of Combat Team 28 and the Bloodiest Battle in Marine Corps History

Haynes, who was a captain at Iwo Jima, and military historian Warren ( ) revisit familiar ground in this account of the 1945 Pacific battle, relying heavily on Haynes's own memories of serving with the 28th Marine Combat Team. The 28th landed with the initial assault on February 19, 1945, capturing Mount Suribachi after four days despite fierce opposition. While America cheered the famous flag-raising photograph, fighting continued for another month during which most of the 28th became casualties. The book is not a critical analysis of events. The short biographies of senior officers contain only praise; the enlisted men are colorful but dedicated; controversies that surrounded the invasion's planning and execution appear, but the authors do not take sides. Even the Japanese appear as brave and skillful soldiers. The book's first half, which ends with the invasion, will hold most readers, but the conquest of the island, page after page of gruesome, almost suicidal small-unit actions against an enemy that fought to the death, may lose all but Marine aficionados.