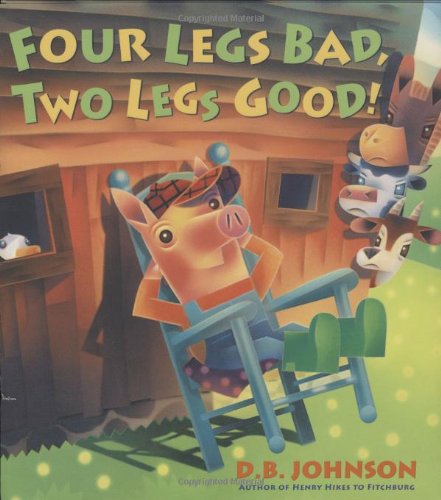 Johnson, whose Henry picture books encapsulate Thoreau’s philosophy, grazes the surface of in this barnyard tale. Here, a bipedal pig called Farmer Orvie, undoubtedly in tribute to Orwell, presides over a dilapidated, tin-roof barn; its sign, “Manor Farm,” has been changed to read “No-Man Farm.” Orvie paints his motto on the barn’s faded boards (“4 legs bad, 2 legs good”), and spends his days barking orders at a donkey, cow, goat and duck. As in another political primer, , the duck turns out to be a troublemaker. Since she walks on two legs, she reasonably asks, “Can I be the farmer now?... You don’t pull the plow. You don’t cut the hay.” When Orvie refuses to accept her logic, Duck stages a coup by pulling a bathtub plug from the pond and draining the water supply. Never mind that real ponds don’t work this way—the convoluted tactic forces all five animals into cooperation, whereupon Duck establishes a new rule of “18 legs best.” Johnson chooses a glowing earth-tone palette of sunlit greens, orange golds and purplish browns for his fine-tuned multimedia illustrations; his cubist style, geometric shapes and flattened, hinged planes hold attention where the plot lags. Ultimately, Johnson quells the revolution and settles for a tidy wrap-up, placing Duck in the governing position. Where the Henry books deftly adapt 19th-century ideas, this story trades on a superficial resemblance to its literary model to sound a basic lesson in getting along. Ages 4-8.