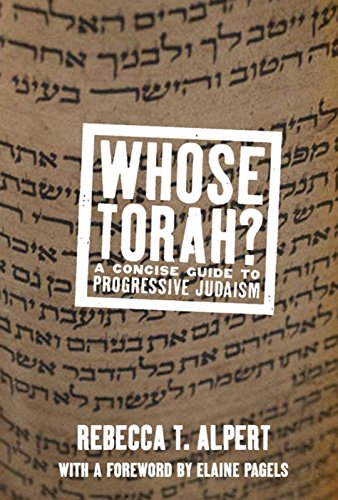 Whose Torah? A Concise Guide to Progressive Judaism

Pursuit of (justice) takes many forms, and Alpert, among the first women to be ordained as a rabbi and current chairperson of the religion department at Temple University, addresses everything from sexuality, gender and race to war, peace, poverty and the environment under ’s capacious umbrella. Throughout this concise introduction, Alpert attempts to show how progressive Jews are reshaping questions about activism and justice. While quick to remind readers that among two Jews there will always be at least three opinions, she manages to cover a wide range of perspectives—biblical, historical, political and personal—with a surprising amount of depth, in a very small space. Replete with introductions (and resulting acronyms) to an array of organizations, movements and leaders within the ever-growing progressive community, this is as much a primer to progressive Judaism for both Jews and Gentiles as an inspiration for just living in the 21st century—whether that means treating our neighbors, our environment or even our enemies well.